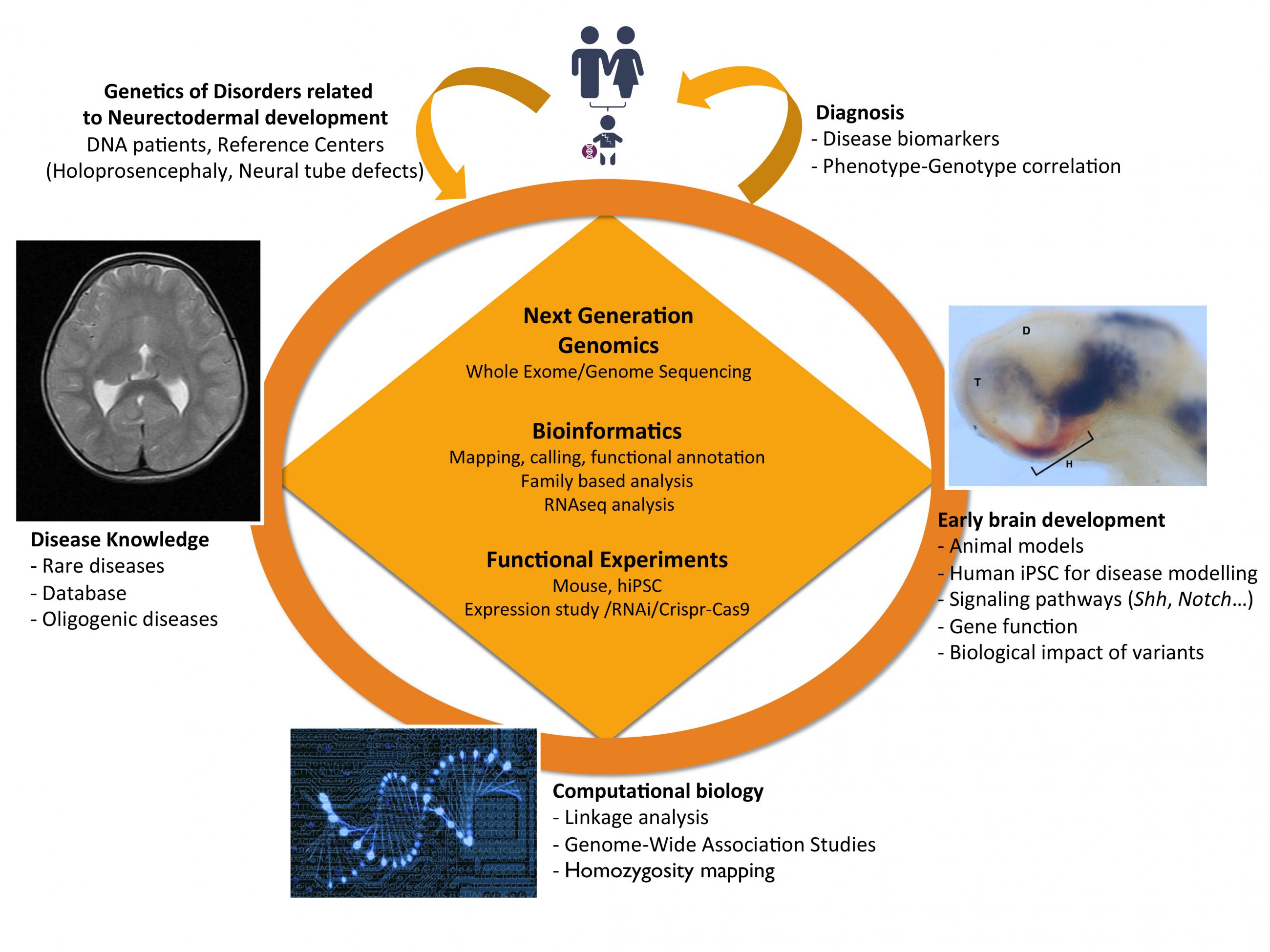 Understanding the complexity of the brain is a fascinating problem and it stands necessary to provide answers to many problems of human health. Our team seeks to understand how the forebrain is built and how deviations from the normal plan cause diseases. Our research encompasses mouse and chick embryo manipulation, human induced pluripotent stem (iPS) cells differentiation, imaging and omics studies.

In our research programme we use animal models and human iPS cells to investigate the cellular and molecular mechanism orchestrating by Sonic Hedgehog (SHH), focusing on brain regionalisation and tissue morphogenesis at neuroectodermal stage. SHH is a secreted signalling factor that informs the cells in neighbouring tissues of their position and identities by initiating transcriptional changes, in a dose-dependent fashion. Thus, regulation of SHH activity must be tightly regulated during neural tube development. SHH haploinsufficiency is the predominant cause of holoprosencephaly (HPE), a structural malformation of the forebrain midline.

Our work on Holoprosencephaly contributes to the understanding of early brain development: we have developed and are currently characterizing several mouse models for SHH deficiency in order to understand the pathophysiology of HPE and describe normal brain development. We recently demonstrated that inhibition of NOTCH signalling in chick and mouse embryos induced a specific downregulation of SHH in the anterior forebrain (Hamdi-Rozé et al., 2020). We also revealed that haploinsufficiency of the SHH and NOTCH signalling pathways synergized to produce congenital hypopituitarism.

Abnormal neural tube development participates to the aetiology of a number of neurodevelopmental disorders. In our team, close proximity between basic and clinical researchers allows the study of samples derived from human patients with disorders including holoprosencephaly and Spina dysraphism (Spina Bifida). The team develops exome/genome and RNA-seq sequencing approaches to identify new molecular markers for these severe polygenic diseases.

Despite the complex architecture of mutational events associated with HPE, the various proteins involved appear to converge on a common pathway, SHH. However, 70% of HPE patients still remain undiagnosed (Dubourg et al., 2018). Thus, more gene(s) or variants accountable for the disease must be identified.

We have discovered numerous candidate genes of unknown function during neurectodermal development (Kim et al., 2019). We are currently using gain- and loss of function studies in vivo and in vitro to elucidate the functions of these novel genes. We are developing cellular and animal models for these novel genetic variants to elucidate common pathophysiological events occurring in HPE.

Several genes have been implicated in holoprosencephaly but its genetic basis remains unclear: different transmission patterns have been described including autosomal dominant, recessive and digenic inheritance. Conventional molecular testing approaches result in a very low diagnostic yield and most cases remain unsolved.

In our team, we address the possibility that genetically unsolved cases of holoprosencephaly present an oligogenic origin and result from combined inherited mutations in several genes (Kim et al., 2019). We combine clinically driven strategies and omic screens with DNA sequence variant analyses (Whole Genome/Exome Sequencing) to circumvent the limitations of classical prioritization approaches (Kim et al., 2020). More precisely, we focus on the implementation of innovative strategies allowing: (1) the identification of molecular signatures for diagnostic purposes by phenotyping and multi-omics approach; (2) the characterization of rare variations affecting the translation dynamics of proteins; (3) the use transcriptome sequencing (RNA-seq) approaches to better characterize the impact of DNA sequence variants on human gene function (expression and splicing), and, (4) the exploration of regions of the genome involved in the regulation of gene expression (integration of ChIP-seq and RNA-seq data).

We considered that an important objective of our research team resides in transferring the knowledge we acquired in the course of our exploratory research to clinical practice. Indeed, the close proximity between our team and several clinical units at the Rennes Hospital (CHU Pontchaillou) greatly facilitates the swift application of important relevant discoveries to daily clinical practice. Thanks to the presence of clinical practitioners in our team, research conducted in the lab positively impacts on clinical activities.

We use clinical samples to study expression of disease markers; then we provide clinician member’s new diagnostic tools based on our understanding of disease development. This constant feedback promotes the discovery of disease biomarkers and improves diagnostic and prognostic.