The team “QCPS” (Quality Control in Protein Synthesis) is dedicated to the study of the macromolecular interactions involved in the translation of proteins in bacteria. Our research program is divided into three lines of investigation whose paths constantly cross each other:

Line 1 – We conduct molecular and functional studies of the ribosome, with a focus on trans-translation. This mechanism ensures the recycling of stalled ribosomes and the degradation of incomplete nascent proteins when incomplete messenger RNAs (mRNAs) are translated under several stress conditions. It is striking that trans-translation is essential for the survival of many pathogenic bacteria. 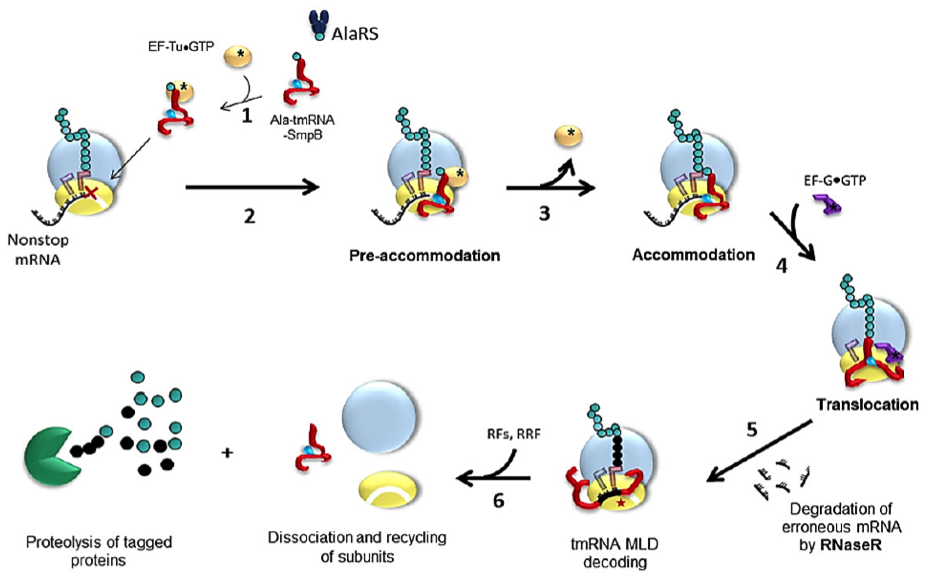 The trans-translation mechanism.(1) After aminoacylation of tmRNA by alanyl-tRNA synthetase (AlaRS), the quaternary complex Ala-tmRNA-SmpB-EF-Tu•GTP is formed. (2) Pre-accommodation step: the quaternary complex recognizes the vacant A-site due to the C-terminal tail of SmpB. (3) Accommodation step: EF-Tu is released after the hydrolysis of GTP into GDP. Ala-tmRNA-SmpB accommodates into the A-site and the peptidyl transfer takes place on the TLD. (4) Translocation step: after peptidyl transfer of the nascent peptide from the P-site tRNA to the ala-tmRNA, EF-G•GTP binds to the ribosome. TLD-SmpB and tRNA are translocated to the P- and E-sites, respectively. The tmRNA resume codon is then perfectly positioned in the A-site for decoding (5). In this step, the defective nonstop mRNA is degraded by RNase R. (6) Elongation and termination: canonical translation resumes on theMLD until the ribosome reaches the termination codon, within helix H5. The tagged peptide is released, and the two ribosomal subunits are dissociated to be recycled. The tagged peptide is then recognized by proteases and degraded. (extract of Guyomar & Gillet. Ann. N.Y. Acad. Sci. 2019).

Line 2 – We perform high resolution cryo-electron microscopy (cryo-EM) studies of the ribosome. This line of research requires a multidisciplinary and integrated structural biology approach. Indeed, from the biological data obtained in part 1, we analyze several steps of trans-translation that remain elusive as well as how ribosome protection factors interact with the ribosome. Cryo-EM is a method of choice for studying the 3D structure of large macromolecular complexes. We process the data on open access facilities equipped with FEI Titan Krios microscopes and direct electron detectors, e.g. via French and European structural biology infrastructures such as FRISBI (http:/frisbi.eu) or Instruct ERIC (https://instruct-eric.eu). This workflow was successfully applied by our team, leading to the first 3D high resolution reconstructions of stalled ribosomes.

Line 3 – We develop novel ribosome rescue inhibitors. In order to detect potent inhibitors of trans-translation in bacteria we created reliable fluorescence reporters systems: one in E. coli (Macé et al., 2018) (patent application no. EP 16.200144; 2016), the other in vitro (Guyomar et al., NAR 2020 Feb, patent n° EP/2018/063780). The in vitro system is based on the reassembling of GFP to evaluate trans-translation (Scheme 1). It has been developed using E. coli model but it was also adapted to the ESKAPE (Enterococcus faecium; Staphylococcus aureus; Klebsiella pneumonia; Acinetobacter baumannii; Pseudomonas aeruginosa and Enterobacter spp.) pathogenic bacteria because of their increased resistance to commonly used antibiotics (Thepaut et al., bioRxiv 2020.12.16.423090).

Scheme 1. Reassembling GFP by in vitro trans-translation. 1: Canonical translation of sfGFP1-10 mRNA lacking a stop codon (red cross). 2: Due to the absence of termination signal, ribosome is stalled. Two tRNAs are in the P (yellow) and E (purple) sites, and the A site is empty. 3: The tmRNAGFP11-SmpB complex binds to the stalled ribosome, and SmpB’s C-terminal tail recognizes the empty A site. 4: The translation restarts thanks to the tmRNAGFP11 MLD, which encodes the missing eleventh domain of the sfGFP (green tmRNA section) and therefore adds this domain to the incomplete sfGFP1-10. 5: The process ends when the tmRNA stop codon (red star) is reached. The complete sfGFP is released and becomes fluorescent. The 50S and 30S subunits are dissociated to be reused, and the tmRNAGFP11-SmpB complex is recycled.

The screening systems are used to develop new inhibitors from a structure-based computer-aided drug design approach and from screening of chemical and natural products libraries.

We plan a constant and fluent pipeline, from the identification and improvement of new antibiotic molecules to their in vivo activity in ESKAPE bacteria. trans-translation inhibitors arising from high-throughput screening will be chemically modified and improved. In the end, we expect to analyze structurally their interactions with the ribosome and tmRNA-SmpB complexes using cryo-EM.

- Biochemical assays such as in vitro trans-translation assays to permit rapid and HTS of the activity of the molecules on the ribosomal rescue systems of ESKAPE pathogens.

- Microbiological Assays : the most promising candidates are assessed phenotypically by MIC determination onto a set of predefined resistant and clinical strains. We also analyze for specific drugs whether resistance mechanisms evolved in various ESKAPE as well as potential cross-resistance with classical antibiotics targeting the ribosome.

- Structural analysis by cryo-electron microscopy : Cryo-EM is used to determine structures of the inhibitors bound to stalled ribosomes and/or tmRNA-SmpB complexes. This technique has become a method of choice for studying the 3D structure of large macromolecular complexes. The ever-growing development of high-resolution microscopes, detector hardware, and image processing software has led to a “resolution revolution” in the field. This opens the way for the structural analysis at (near-) atomic resolution of active macromolecular complexes which would be inaccessible to X-ray crystallography or NMR. Another major advantage is the ability to visualize the macromolecules in a fully-hydrated state, so conformational changes directly linked to their biological activities can be observed.