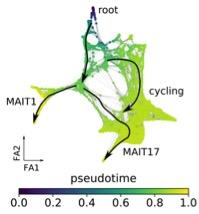 MAIT cells are innate-like T cells: they differentiate into effector cells directly after selection in the thymus. We reported that this innate-like phenotype relies on positive selection by hematopoietic cells and on the engagement of the SLAM-SAP signaling pathway. We found that the transcriptional program acquired by MAIT cells in the thymus is not unique, but rather shared with other innate-like T cells such as NKT cells, which suggests similar developmental mechanisms and similar behavior in periphery. Using parabiosis, we established that the MAIT program, like the NKT program, is indeed associated with an ability to reside for weeks into tissues such as spleen, lung and liver.

Going forward, we are extending our research to other mammalian species to:

MAIT cell interactions with the microbiota 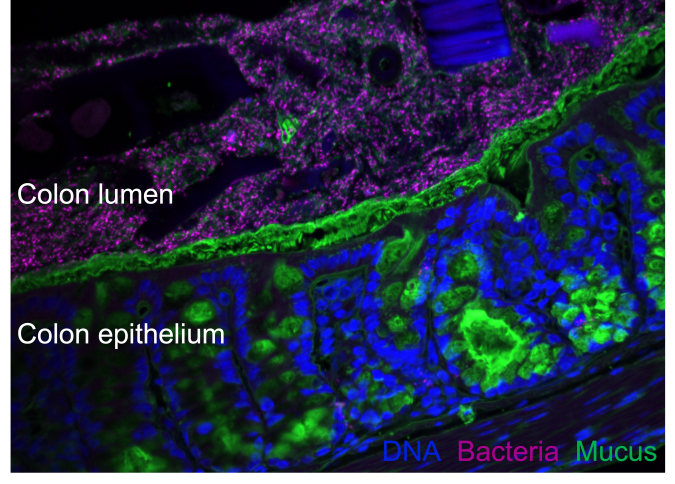 The distinctive feature of MAIT cells, which is conserved across evolution, is their unique specificity for a new class of antigens: unstable adducts derived from the riboflavin biosynthetic pathway, found in most bacteria but absent in animals. MAIT cells are lacking in germ-free mice, and we found that MAIT cell development relies on the transfer of microbiota-derived metabolite antigens from the gut to the thymus. The determinants of MAIT antigen production in vivo are unknown. After thymic egress, MAIT cells populate mucosal tissues such as the gut (where they represent 1-10% of T cells in humans) and liver (10-45% of T cells), yet the function of MAIT cells in these tissue sites remains elusive.

We are now using gnotobiotic and genetic models, coupled to metagenomic approaches to further understand this host – microbiota interaction in vivo: